Dry Sprinkler Powder Aerosol, (condensed aerosol fire extinguisher) is a micro particulate-based fire reduction/extinguishing system. Comparable to other dry chemical or gas-based systems used to fight fires. The expansion of the gases produced in a chemical reaction within the DSPA unit propels the microparticles into the environment where they interact with the fire’s own chemical processes suppressing/extinguishing the fire.

The DSPA suppressants, operate on all four elements that combine, generating the chemical reaction fundamental to a fire, the “fire tetrahedron”, Heat, Fuel, Oxygen and Chemical Reaction. The extinguishing mechanism primarily involves the chemical reactions, using free radicals generated by the flame, and impede the combustion within the fire. The microparticles confront and surround the flame, though extremely small, their enormous collective volume absorbs the flame’s heat energy, break down and release massive concentrations of potassium radicals. These radicals join with the hydroxide, hydrogen and oxygen free radicals maintaining the combustion process. Potassium hydroxide and water molecules are produced as a harmless by-product of this process. These potassium radicals flourish as they are equally produced and consumed by the inaction with the fire radicals, thus, disrupting the chemical reactions essential to the combustion process. As well, the aerosol’s particles and gases mixing with the flame’s own gas, isolating them from the fuel, effectively removing their fuel source. These cycles, disruptions and isolation of the flame’s fuel source continue until the combustion chain reactions have concluded, the heat is reduced, and extinguishing the flame. 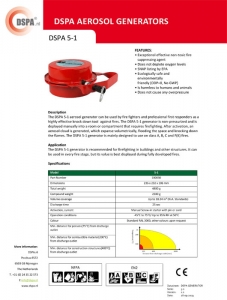 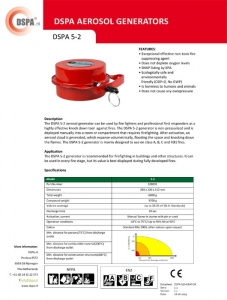 Thanks.
I used one of my old ones to protect the 2 large diesel tanks at a fully involved agricultural light weight construction electrical generating station.
Even with the open ventilation it shut it down and protected the tanks. Insurance company and property management were very happy.